The power of the traditional Japanse tea seremony

Do ancient rituals have any relevance in the modern world? Or do they just indulge our sentimental attachment to a past that we romanticise as some idyllic state that never really existed?

Visual artist Margret Wibmer and art curator Akane Naka-Mori have developed an exclusive event based on the traditional Japanese tea ceremony. The event premiered at the Nishida Kitaro Museum of Philosophy in Kanazawa in February 2013. Camunico asked them to develop a tailored event for an invited group of leaders in Amsterdam. The aim was to create an environment where past and present meet.

What is the relevance of an ancient tea ceremony to contemporary leadership?

A ritual based on Zen Buddhism, the traditional Japanese tea ceremony is more than mere form. The slow, deliberate and ritualised nature of the tea ceremony provides participants with the space and time to reflect; to step back from the everyday in a ceremony where ritual and aesthetic deliberately slow things down to provide mental space. Japanese leaders often used a tea ceremony to create space for reflection before taking important decisions. Many of today’s leaders are realising that the entrenched habits of ever more busy lives and rapid-fire decision-making do not necessarily lead to sustained success. They are seeking reflective space, whether through mindfulness training or various other approaches.

Rituals have social, political and legal dimensions. Since the 16th century, political leaders in Japan have used tea as part of a ritual of peace and consensus. Tea huts and tea rooms became the antithesis of war and violence. They were known to be the only places where the samurai did not bring their swords inside. At Camunico we believe that there is much to be learned from ancient rituals, the arts and the humanities. As we enter an age of ever increasing uncertainty, it is those corporations and institutions that can create the space for creativity, imagination and reflection that will be able to sustain success. Others will be too busy doing things at breakneck speed to devote time to thinking and reflection.

Today, many different approaches have been developed to create space for creativity and reflection. Yet all of them can gain something from the traditional Japanese tea ceremony – make time and space, do not rush, be meticulous, and recognise the importance of aesthetics, acting from your heart and leaving your sword outside. 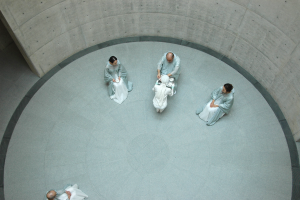 This article first appeared in the Camunico Annual I

The Social Value of Financial Services
Scroll to top