Business would like nothing better than to be acultural, asocial and amoral. The problem is that today this is simply not possible – a situation that makes many business leaders uncomfortable.

Recently reading Simon Zadek’s book The Civil Corporation, I came across a story about a utility company that was approached by an activist group and asked to stop issuing hunting licences on land that it owned. The response from the company was: “To be honest, we don’t have a view on hunting, and we do not particularly want to have one. Where does it all end? If there is a church but no mosque on our land, will we eventually have to have a view on God?” This response betrays a frame of mind that is no longer viable in today’s world.

In this example it is impossible for the company concerned not to have a view on hunting. Whether it continues to issue hunting licenses or stops issuing them, it is taking a view, either in support of or against hunting. The trouble is that most corporations are ill-equipped to deal with such messy dilemmas – debates that are fundamentally cultural, social and moral not technical or operational.

Playing by the rules

Businesses would rather live in a world of clear and consistent rules, hire expensive advisers to make sure that, while exploiting all available loopholes, they stay within those rules. This avoids the need to become embroiled in the much messier questions of morals and cultural values – something they don’t spend much time teaching in business school and which many businesses would like to believe is not their domain.

In the current debate about tax avoidance by multinationals, Sir Roger Carr, president of Confederation of British Industries (CBI) has said it “cannot be about morality… it’s all about the rules.” He is wrong. It is about both.

The expectation that business can just follow the rules and ignore the broader moral dimensions of their actions is out-dated. Societies’ expectations have changed. Activist groups and, increasingly, governments and other institutions, will call out corporations that are perceived to be behaving unethically, even if such behaviour is technically within the rules. Rules and legislation take time to compile and implement. By the time they are complete, they are largely obsolete and the world will have moved on. Rules are also, by their nature, limited in their scope. They can never cover every nook and cranny of evolving social expectations.

The consequences of behaving in an acultural way can be immense. Businesses can spend years and endless resources trying to be successful only to see it all come crashing down. Be it in the realm of animal experimentation, genetically modified foods, environmental degradation, human rights, taxation, resource extraction, investment strategy, online privacy, zero hours contracts, or the many other areas of cultural and moral complexity, businesses have wasted resources and faced failure because they either dismissed or failed to foresee the broader socio-cultural implications.

Business is embedded in society. It is not separate from broad, messy and chaotic social behaviours. Sustainable businesses, therefore, need to develop clear views on all the socio-cultural aspects with which their business interacts. It is simply not viable to set limits of involvement or to persist in the view that the role of business is to generate wealth and shareholder value rather than to play a full and active role in building societies – including getting directly involved in the complex moral issues that affect us all.

Business leaders are often led further astray by professional technocrats – be they scientists, economists or other professional advisers. These advisers see themselves as rational, objective, knowledgeable and all the other adjectives that are used to justify being acultural and, supposedly, unemotional. For instance, supported by scientists and other technocrats, many corporations easily fall into the trap of reaching the conclusion that the facts and science are on their side.

The solution is seen as spending millions on advertising, PR and lobbying to “educate” the decision-makers and a public that is perceived as ignorant, uninformed or irrational. This epitomises the acultural, technocratic approach to business and society. Sometimes it works. Increasingly it is blowing up in management’s face.

In the field of genetically modified crops for example, Sir Paul Nurse, president of the Royal Society, put it like this: “the consensus view of the majority of expert scientists is that in principle this is a safe approach and can lead to benefits, but not only commercial ones but also may allow us to tackle global problems such as sustainability and foodproduction, crop yields, marginal habitats for crop growing, for example”.

Decades and hundreds of millions have been spent trying to educate the European public in this “scientific truth” – which fails to address the many and complex issues in the GMO debate. It has all come to nothing.Monsanto recently threw in the towel and announced that it would stop trying to introduce GMOs in Europe. The more the “rational” message was pushed, the greater the resistance and the less it was believed – not least because it was self-interested corporations that were doing the talking.

Business leaders have very little option but to build the capabilities necessary to become embroiled in the muddy waters of moral, cultural and social debate. They need to abandon the delusion of being able to continue to operate in an aseptic environment bounded by a set of clear and supposedly rational rules. Building such capabilities will not be straightforward. I have not yet seen cultural studies or the building of ethnographic skills on any business school curricula.

Nevertheless, these capabilities can be built – if slowly and painstakingly. Already today we see some corporations better equipped than others at understanding and operating within cultural frames. Usually they are the ones who have learned through painful – and expensive – experience.

The first step is to recognise the need and to start the conversation. The second is to make social, cultural and moral discussion the subject of every project or investment proposal. Training and development programmes can help provide the skills necessary. Over time corporations need to grow acute and sensitive cultural antennae to supplement the good understanding of markets, customers, ROI, and all the other traditional business skills that they already possess. Those with the most sensitive antennae will likely outpace competition by a wide margin. 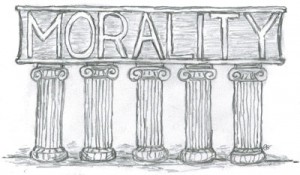