Sustaining the future of arts organisations

When the first rumours concerning structural cuts in the cultural sector began to circulate, the vast majority of the sector, while almost paralysed by the news, resignedly awaited the announced reforms. Now that most plans have been announced it would seem that protest, with everyone fighting for their own survival, is the only reaction. Institutions would be wise to create conditions which would allow them to gain control and ultimately emerge from this conflict stronger and more independent.

The absence of future-directed ideas enabling cultural organisations to operate more independently can be attributed to the nature of the leader. Leaders can be roughly divided into two categories: on the one hand there are leaders who are focused on control and management, driven by the desire to achieve maximum results from the current situation, and on the other there are leaders who are focused on innovation, driven by the desire to capitalise on future developments. The preference for one of these roles is determined by nature and both contribute significantly to the survival power of organisations in the longer-term.

From a business point of view, the cultural sector has sailed in relatively calm waters over the last decades. In the past, this has led to the sector attracting people who functioned best in a stable environment and who occupied themselves unconcernedly with the content.

Today, the sector lacks people who are naturally focused on change and exploring the new. In countries where structural public funding is traditionally lacking, as in the United States, cultural institutions have a more obvious mix of both types of people, which has created a more active and entrepreneurial climate.

A good example of refreshing leadership in the Netherlands is Ernst Veen who brought the Russian Hermitage museum to Amsterdam, thus creating the perfect complement to the cultural collections of the Netherlands and, as a result of the relationship with Russia, a new range of possibilities to operate in a more entrepreneurial way.

The structural character of the proposed reforms demands fundamental cultural changes. Boards (supervisory or trustees) play a crucial role in this respect. In their role as employer, they have an important responsibility with regard to the employment policy of the management. They must make sure that their own composition, and that of the management team, remains in keeping with changing circumstances, both internally and externally. In their role as supervisor and advisor they must, now more than ever, take an active part. After all, they are ultimately responsible for the quality and continuity of the institutions and must encourage, motivate and support the management in carrying out an innovative and progressive policy.

Institutions are expected to look for new ways to demonstrate their relevance and to substantiate their right to exist. Elaborating on past experiences alone is not enough. Institutions will have to get to grips with their uncertain future. Scenario planning could be very instrumental in this regard. This involves the development of various scenarios based on trends that have an impact on the sector.

The British Library recently developed scenarios about the future of academic libraries. This was a good example of a large institute dedicating itself to a cause on behalf of an entire sector. Individual university libraries were able to take advantage of this by selecting the scenario best suited to their needs and developing their own strategy based on this.

Very few cultural institutions have the financial means to successfully complete the necessary changes within the time frame set by many governments. This then raises the question of how existing business models can be made more flexible and more resilient.

Simply economising on operational costs will, in most cases, be insufficient. It will be necessary to break with old habits and traditions and search for other ways to realise objectives.

In addition, it will be necessary to invest available funds – either temporarily or on a long term basis – in other ways, whereby flexible costs and seeking cooperation will both play integral roles. A good example in this context is “Plus Tate”, an initiative of the Tate in which twenty plus visual arts institutions created a platform for the purpose of developing new forms of cooperation.

The role of government

Governments must realise that the behavioural change it desires will require a significant amount of time and money. In addition to allowing more time, it would be appropriate for the government to support the sector by creating the right conditions for it to actually realise these changes; for example, a study of the composition of leadership teams would gain more meaningful insights and advice and thus create a more effective balance and cooperation. Support in making key trends more transparent could help the sector in the long-term. In the short-term, it would help the sector if the possibilities and impossibilities of cooperation were studied further. By providing insight in the areas that are the most profitable or the easiest to realise will enable the sector to take faster and more targeted action. Government support of this kind would give the sector the tools to actually realise the structural changes that it advocates.

The cultural sector is a common good and only balanced cooperation between all interested parties in civil society will ensure that it emerges from this conflict stronger and more independent. 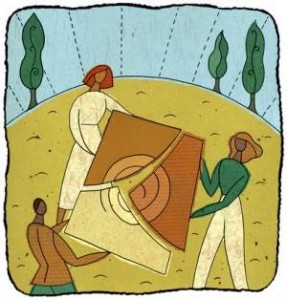 This article first appeared in the Dutch NRC

Download a .pfd of the article in Dutch here

Business is a Social Enterprise
Scroll to top