Surveys claim consumers make decisions based on conscience, so why is it so hard to convert these trends into sales?

A senior marketing executive from a well-known FMCG company recently complained that its newly repackaged (less packaging, recycled and recyclable) and “green” branded product was simply not getting off the shelves.

In spite of the many years during which branding and advertising agencies have created substantial business units by promising endless riches to flow from green re-branding, many have learned that, for the vast majority of brands, the example quoted above is more representative of the reality on the ground. Why? Have we reached and passed “peak green”?

Can we get beyond the Bobos?

There is little doubt that we have seen an increased environmental consciousness across significant parts of our society. It is also true that in market study after market study consumers claim that social conscience is an important driver of purchase behaviours. So why is it so difficult to convert these trends into sales and profits? Why is it that “green” products still only tend to appeal to Bobos (bourgeois bohemians) – and only a small fraction of those – and that just a small proportion of green brands actually achieve meaningful success?

The answer is that environmental/social consciousness is only one part of what are much broader and more complex cultural shifts. Picking out this trend in isolation and trying to build brands around it using traditional marketing paradigms has a very low likelihood of success.

Cultural shifts have created a landscape of quicksand

Over the last 20 years we have seen continuous cultural shifts that mean marketers now stand on ground more akin to quicksand than solid rock. It is impossible to explore all these changes here but I will attempt to give a flavour. The business scandals of the early 2000s (remember Enron, WorldCom and others?), the current banking and economic crises, debate over tax avoidance, and many serial events, have significantly undermined the standing and credibility of big business in 21st-century society.

Simultaneously, the change in parenting values and educational approaches, and the rise of internet culture and social media among other factors have changed the perception of “authority” and created cultures that combine a sense of personal empowerment with widespread skepticism. This is all layered across decades in which the middle classes have become financially squeezed and increasingly insecure even as they read about the creation of vast concentrated wealth and of hefty CEO salaries that are simply inconceivable and incomprehensible to most people.

Given this (admittedly highly simplified) background, a brand of some industrially produced chemical product that is simply re-packaged and branded “green” does not say “responsibility” and “social conscience”. Rather it sits on the shelf and, to the vast majority of consumers, screams “hypocrisy” and “tokenism”. Similarly, the launch, with much fanfare, of hybrid or other low-emission cars does not convince anyone of a sense of corporate social responsibility when, in the same breath, the car industry uses its lobbying might to block legislation to limit CO2 emissions.

Most green branding efforts do not fail because of “lack of consumer demand” – as many have now taken to stating. They fail because the branding efforts are superficial, not grounded in the complexity of current cultural change and end up sending messages that are often the opposite of those intended.

The environmental narrative is failing

When planning for greening their brands, executives also need to bear in mind that the environmental narrative as put across by the BINGOs (Big Environmental NGOs) and the mainstream environmental movement is in rapid decline in terms of cultural relevance. The big picture apocalyptic narrative packaged in the wrapper of human guilt is a negative framing that not only fails to resonate with most people but risks painting the problem as too large and intractable for individual action (such as buying a “green” brand) to have any meaningful impact. This narrative also fails to connect either with what I shall simplistically call the social media cohort that lives in a world of perceived personal empowerment with no culture of guilt, or with the squeezed middle cohort whose everyday life issues make such big picture narratives irrelevant to their lives.

As corporations increasingly partner with BINGOs and others in the mainstream environmental movement, their strategies risk becoming infected with this outdated narrative that, in marketing terms, makes for good fund-raising fodder but has little relevance to commercial brand building.

Shall we all just give up? Is it simply hopeless? In spite of the glossy presentations of branding agencies, are successful green brands a fruitless quest?

Yes and no. Certainly most green branding efforts are better reflections of the personal views and self-image of corporate management than they are of the broader popular culture. They may represent important steps on the road to improved internal thinking about how corporations can modulate their environmental impact, but they are unlikely to be the money-spinners that some have painted them to be.

The opportunities that exist in this space are likely to be significantly fewer but they could potentially be much bigger than has been explored to date. Corporations and brand managers, therefore, need to think “less but bigger”. To get there, the concept of “green” needs to be thought about and understood within the bigger and broader cultural shifts that have been happening and will continue to happen. Similarly, managers need to think more broadly about the complete identity of their individual brands – including their corporate brand – and their relevance to the evolving post-modern culture that, to a large extent, represents the very antithesis of the values embodied by the large, multinational corporation.

Finally, traditional marketing paradigms do not fit with brands that are trying to ride the zeitgeist of today’s complex cultural shifts. A senior executive of a major multinational corporation recently said: “The best way to educate is to find new channels and the digital marketing approach is very powerful.”

These words betray the outdated idea of “educating” the consumer while continuing to see the world of social media simply as another conduit for traditional marketing methods – albeit with a nod to the idea that instead of push marketing we now supposedly have conversations. Social media are not yet embraced as a cultural phenomenon that has changed how people see the world and their own place in it. This new and exciting world may offer some big opportunities. But we have yet to learn how to find them and to accept that there isn’t space for everyone on this particular bandwagon. 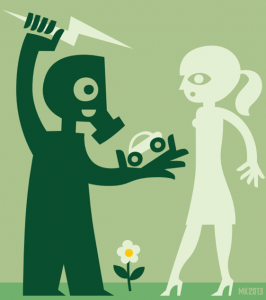 This article first appeared in the Guardian and in Het Financieele Dagblad. Text Joe Zammit-Lucia .