Effective leaders encourage dissent and activism, combining listening skills with the ability to define and live up to a convincing moral and political vision.

What are the characteristics of good leadership in an age of activism? Let us take an example that is currently unfolding in Romania around the proposed mining for gold in the Rosia Montana area.

Rosia Montana’s gold reserves have been mined since Roman times, and in the most recent Communist era it was done badly: Hectares of abandoned mining operations cover the landscape, chemical effluent is leaching out of these abandoned sites and polluting the water supply, and the local rivers run bright red. The area is an environmental disgrace that needs some 500 million Euros in clean up and restoration. The proposed mining site contains the legacy of previous operations, but absent further development, these funds will simply not be available.

The local communities also need social and development support. Surrounding towns have periods when running water is available only for a couple of hours a day and the local economy is moribund with some 80 percent unemployment. Rosia Montana Gold Corporation (RMGC), the company involved, has already pumped more than $500 million into the local economy for water purification efforts and the restoration of local heritage sites. In the longer term, infrastructure development and post-mining remediation would open the way for a viable and sustainable local economy.

In addition, the project has the potential to pump $24 billion into the wider Romanian economy. Polls consistently show that 70 percent of the Romanian population support the project, and Struan Stevenson—a member of the European Parliament and president of the Intergroup on Climate Change, Biodiversity, and Sustainable Development—has written that it “will actually produce a net-enhancement of biodiversity during the mine’s rehabilitation process.”

One would think that investment in such a project would be a no-brainer in a country that is still struggling to recover from an International Monetary Fund bailout and that has a future almost totally dependent on attracting foreign investment. Not so. When the Romanian government recently presented a draft bill to parliament to approve the project, a small number of protestors took to the streets. Spooked, and believing that parliamentary support for the project might drain away, the government withdrew the bill and has, instead, set up a Parliamentary Commission to re-examine all the evidence. Activists have kept up their protests while refusing to meet with members of the commission to present their point of view and their reasons for opposing the project. The Commission has now rejected the original bill, and the government is in the process of drafting a new one.

This state of affairs is becoming commonplace in many countries.

In today’s connected world, vested interests can generate enough noise to spook governments into paralysis, often to the detriment of the common good. What type of leadership is required to manage these issues?

A common political response to conflict is to withdraw into “examining the science.”

This is sometimes politically expedient, in that it allows groups to justify any decision in scientific terms. However, most often such a response is sign of weakness. I recently put it to a senior member of the British Parliament that science can provide only some facts and uncertain projections regarding the potential consequences of alternative courses of action. Science is not equipped to make decisions that are fundamentally moral and political.

The response was, “But it’s much easier to tell the public that we’re doing this because the science says so rather than because it’s our political decision.” Effective leaders do not hide behind such transparent veils.

When Margaret Thatcher transformed the British economy in the 1980s, she never justified her actions on the basis of “the science.” Whether one agreed with her politics or not (and many didn’t and don’t), she managed to achieve transformation by presenting a very clear and consistent political and moral vision, and acting decisively to deliver that vision. Only by having such clarity of purpose could she avoid derailment by the large and often violent protests she encountered.

In a functioning democracy, good leaders listen to opposing views and integrate them into their thinking (something many have said Thatcher was unable to do). They neither stifle opposition, nor shoot or jail protestors. But they also do not allow any and all opposition to derail their political vision. That is a sure way of encouraging further disruption. France, for instance, has a tradition of people taking to the streets in resistance to government policy. Farmers, truckers, fishermen, and other groups routinely respond to probable reforms that threaten their own narrow interests by mounting blockades and other forms of disruptive action.

The government almost always capitulates—a sure way of encouraging the same behavior next time around.

As a consequence, France, to the continued detriment of its people’s quality of life, has for decades been unable to reform its economy except through small and largely ineffective changes at the margins.

Neither does activism and resistance to change come only from outside. Often it comes from within.

Recent revelations about the National Security Administration’s global surveillance practices have raised a fundamentally moral and political question: What is the appropriate balance between respect for the individual and one’s allies, and the need to ensure collective security? The Obama administration has shown itself utterly unable to present a coherent and convincing moral and political vision on this question. It is caught between holding the security agencies to account and defending individual rights as enshrined in the Constitution, and falling back on the traditional totalitarian stance of, “If you have nothing to hide you have nothing to fear.” Elected on a strong moral vision that included promises such as closing Guantanamo Bay, in office the administration has succumbed to the internal activism and scare tactics of the security agencies that threaten chaos if they are not allowed to continue with their Orwellian quest for total surveillance. As a result, administration officials are now in a position where they are paralysed and have no idea what to do.

In an increasingly complex world, activism, whether internal or external, is a fact of life and needs encouragement. Only leadership that can present a coherent moral and political vision, and act accordingly, will ensure that reasonable opposition will result in constructive dialog, rather than paralysis and the subordination of the common good to narrow interests. Sadly, such leadership seems increasingly uncommon even as the need for it becomes more essential. 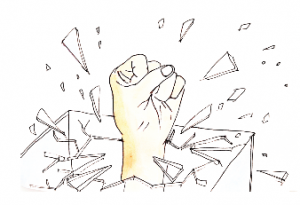 This article first appeared in the Stanford Social Innovation Review.